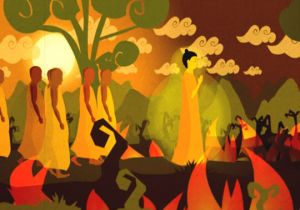 With Wings That Fly Not

- A Dharma Tale from the Jatakas: The Birth Stories of Lord Buddha -

Once upon a time Lord Buddha, accompanied by a retinue of monks, was travelling through the countryside of Magadha in North India, when they came upon a forest fire, which rapidly turned into a raging inferno. Sheets of flame were everywhere. On seeing this, some of the less experienced monks were seized with terror and wondered what measures they should adopt to stop the spreading of the fire.

To ease their panic, other senior monks said to them: "Why should you be fearful when you are in the company of Lord Buddha, who has power over all phenomenon. We should go to the Master at once."

As the monks gathered around Lord Buddha, the World Honourable One continued to walk towards the approaching fire for some way before taking a stand. The fire had by now spread far and wide, devouring everything in its path. But when it came close to the spot where Lord Buddha stood his ground, the great fire came no nearer than sixteen lengths; then went out suddenly just like a flaming torch that had been put out in a barrel of water.

Witnessing this miracle all the monks burst into praise; "Oh how great are the powers of the Buddha. Even this great fire could not come close to the spot where Buddha stands."

Hearing these words Lord Buddha responded, "It is not due to my present power but the power of a former act of truth of mine, that this fire goes out at this spot. Furthermore, no fire will take place in this spot ever again for the rest of this aeon". Then Ananda, the personal attendant of Lord Buddha placed a robe on the ground and the Master took his seat. All the monks bowed to Buddha and sat around him. "Master" they said "We are only aware of the present and have no knowledge of the past, please make the past known to us". And so at their request, Buddha told them the story of an Act of Truth he performed in one of his previous lives.

Once, a long time ago in this exact spot, the Buddha-to-be took birth as a young quail. His parents prepared a nest for him and brought him food everyday. At that time, the young quail was not yet strong enough to either fly by his own effort or to walk upon the forest ground.

One day a fire broke out in the forest, and it swept fast and furiously with the ferocity of an insatiable wild beast. Alarmed and fearful, all the animals and birds in the forest fled from the encroaching fire as fast as they could. The parents of the young quail knew they did not have the body strength to ferry their young one with them on their escape, and so had to fly away on their own, leaving the little quail behind.

Stranded alone in his nest, the Buddha-to-be became aware of the approaching fire and thought to himself: "If I had the strength to use my wings, I would follow my parents to safety. Now that my parents have gone, what could I possibly do to save myself?"

Just then an insight arose from his mind. "In this world of Samsara, there are those who are revered throughout the universe as the Buddhas, the Enlightened Ones. These are the great Compassionate Bodhisattvas (the Great Awakened Courageous Beings) who have gained their release from the realms of suffering by dedicating endless acts of perfections such as generosity, patience, compassion and loving kindness towards all beings and in the process realised the full potential of their Original Nature, and attained the Absolute State of Oneness and Wisdom that is not separate from the Ultimate Truth of Nature. Since I too believe in the same Truth and the Efficacy of Goodness, I will invoke the Buddhas of the past to grant me their blessing to bring true the Ultimate Truth of Nature and by an Act of Faith in that Truth, put a stop to the fire.

Thus fortified by his faith, the young quail called to mind the Efficacy of the Buddhas of the past and performed an Act of Truth by repeating the following stanza: 'With wings that are not yet ready to fly, feet that are not yet ready to walk; abandoned by my parent, here I lie in this nest; I earnestly call upon Jataveda, Lord of fire, stop and turn back.' In this way, with unshakable faith, the young quail repeated this invocation continuously. Even as he was reciting, the fire slow down and turn back to a distance of sixteen lengths before it went out completely as if it had been doused by a great wash of water. From that time on, this spot where the fire came to stop will never be harmed by fire again throughout the remainder of the aeon.

Lord Buddha then said to the monks "It is not my present power, but the power of an Act of Truth I performed in my former birth as a quail, that caused the fire to stop at this spot in the forest".

Lord Buddha then identified his parents in this life were the parents of those days, and he himself was the king of the quails.