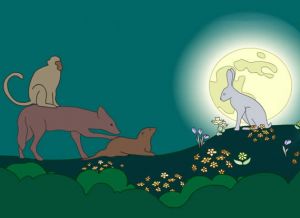 The Hare On The Moon

- A Dharma Tale from the Jatakas: The Birth Stories of Lord Buddha -

Long ago, when Lord Buddha and a sangha of Brethrens were living in Jetavana Grove, a landowner at Sravasti set up a pavilion by his house so that he could invite Lord Buddha and a retinue of five hundred monks to come daily to receive food offering for the duration of one week. On the seventh day, at the request of his host, Lord Buddha related an ancient legend on the virtue of sacrifice.

Once the Buddha-to-be took the birth of a hare and lived in a wood at the foot of a mountain bordered on one side by a river and by a village on the other. He had three friends - a monkey, a jackal, and an otter. During the day, the four friends would gather food by themselves in accordance to their eating habit. By the evening, they would get together and hold discussion on many subjects. Being gentle and compassionate, the hare was looked upon by his three friends as their natural leader. The hare would often speak to his three friends about the virtue of generosity and the importance of observing moral ethics.

One evening which happened to be the 14th of the lunar month, when the full moon was due to appear the following night, the hare informed his three friends that since the 15th day of the month is a holy day, they should fast during the course of that day and offer whatever food they could find to those who were in need of food. In complete agreement, all three friends decided to the do the same.

Early next morning, the otter went down to the bank of the Ganges and found seven fish buried in the sand. These fish were red in colour and linked together by a string. They were caught early that morning by a fisherman who had buried them in the sand to be retrieved later while he went downstream in search of more catches. The otter asked aloud does anyone wish to lay claim to the fish. When he received no reply, he took the fish back to his dwelling, thinking that if no one in need of food asked for the fish, he would eat them himself the following day.

The jackal too started off early that morning and soon came upon the hut of a farm hand who had gone to work in the field. In the hut were two spits holding a pot of yoghurt and a lizard. The jackal asked aloud three times if the food belonged to anyone. When he received no reply, he placed the rope, which served as a handle for lifting the pot, on his neck and grasped the lizard with his teeth and went back to his lair, thinking that if no one in need of food asked for the yoghurt and the lizard, he would eat them himself the following day.

The monkey also set out at dawn and gathered many juicy mangos from the mountain. He took them back to his dwelling and got ready to offer them to anyone who was in need of food. He too was thinking that if no one asked for food, he would eat the mangoes himself later on.

Just like his friends who wished to make an offering of their favourite food to others, the hare gathered a large bundle of his favourite kuca grass when he suddenly remembered that grass had never been a food source for men. Concerned that he had nothing worthy to offer, he decided to take a vow of sacrifice and offer the flesh of his body since men were partial to animal flesh. Thus armed with his resolution, blissful happiness swelled in his bosom. At that exact moment, the earth felt the powerful impact of this vow of selfless sacrifice and trembled in rapture. Music and fragrance filled the air. Rainbow colours suffused the sky amid a backdrop of lightning and gentle thunder. Flowers spontaneously manifested above the hare and showered upon the bodhisattva. Even oceans faraway could feel the force of his vow and stirred in rhapsody.

Sakka, Lord of the Heavenly Beings, came to hear about the hare and decided to test the authenticity of this vow of sacrifice. He took on the form of a Brahmin and manifested, looking as if he were in need of food, beside the otter. The otter at once offered the Brahmin the fish but Sakka declined the offer and moved on. He soon came upon the jackal who was equally readied to offer the Brahmin the yoghurt and the lizard, but these too were refused. Sakka next appeared beside the monkey who offered him the mango fruit. Sakka once again declined the offer and moved on. When he finally came upon the hare, the hare immediately offered his body to the Brahmin as food. Recognising that it was not an easy task for a man to slay someone who had been kind to him, the hare comtemplated what means he could adopt to resolve this dilemma in fulfilling his vow. While he was still in deep thought, Sakka used his miraculous power to cause a heap of burning coal to appear beside him. The instant the hare saw the fire, he rushed forward and paused just long enough to shake his body three times while he called upon any insect that might be hiding in his fur to come out. Thus satisfied there were no more insects in his fur, he leapt into the coal fire blissfully without a moment of hesitation as if he were a swan alighting on a lotus pond.

The hare however did not feel the blazing heat of a roaring fire. Instead he found the fire to be cool to the touch and the flame scorched not even a single hair or skin pore of his body. While the hare was still baffled by this extraordinary turn of events, the hand of Sakka lifted him gently from the fire and carried him to the Heavenly Realm. There, Sakka related the story of the compassionate hare to the assembly of the Heavenly Beings. To commemorate this astonishing act of great sacrifice for all time, Sakka extracted the essence of a mountain and daubed the image of the hare on the surface of the moon - an image that will remain visible till the end of the aeon, so that the virtue of this selfless sacrifice will be known throughout the course of the aeon.

When Lord Buddha finished relating this tale of great compassion and sacrifice, the World Honourable One revealed the identities of these four friends: Ananda was the otter, Maudgalyayana was the jackal, Sariputra was the monkey and Lord Buddha himself was the hare.