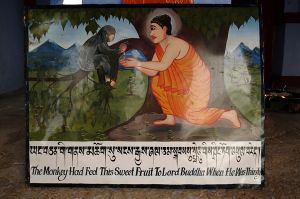 The literal meaning of the Sanskrit term karma is "deed". It is not a law of retribution nor punishment, for nobody can do to us what we have not generated for ourselves. The basic view of Karma, as the law of cause and effect, can be summed up by the Buddhist Scripture Visuddhi Magga (The Path of Purification): "Five causes were there in the past, five fruits we find in present life; five causes do we now produce, five fruits we reap in future life".

The karmic effect of an action, which can be of any aspects of the body, speech and mind, is not determined by the action itself but by the motivating factors behind the action. It is the intention of the action which causes the planting of karmic imprints. A "deed of intent" may fail to materialise due to one reason or another, but if the intention towards it exists, it will still leave a karmic imprint in the mind-stream continuum and the consequences it produces will still manifest when the condition for it to ripen is ideal. The only deed that can be considered a non-karmic action is one which is totally free from the three chief causes of human sorrow - attachment, aversion and ignorance. Otherwise, virtuous actions produce positive karmic seeds, and non-virtuous actions produce negative karmic seeds. Both will come to fruition in the fullness of time to produce either wholesome or unwholesome karmic effects. While karma gives rise to the manifestation of a situation, it does not manifest response to the situation. We alone remain responsible for our past actions as the heir to our karma and master of our own destiny.

As the law of cause and effect, karma is governed by four conditions: firstly, karma is indisputable in that virtuous actions give rise to happiness and non-virtuous actions to unsatisfactoriness; secondly, the karmic effect one comes to experience is always far greater than the karmic imprint one planted; thirdly, no karmic situation will manifest in one's life without one having engendered the cause in the first place; and fourthly, karmic seeds once generated are never lost until their natural exhaustion.

For a karma to manifest, it requires the presence of specific conditions and catalysts. Moreover, the manner in which a karma comes into fruition is determined by the differentiation of heaviness of karmic weight relative to: the nature of the non-virtue, the object of the non-virtue, your intention behind the non-virtue, the action itself, the frequency of such an action, and the attachment of non-virtuous bearing without opponent.