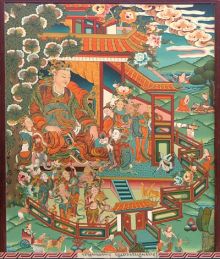 Samsara is the recurring cyclic existence of unsatisfactoriness - a succession of transmigratory rebirths that a sentient being has to undergo until all negative karmic imprints have been purified and a state of nirvana has been attained. The origin of samsara arises out of one's continued attachment to the three poisons - craving, action of ill-will, and ignorance of reality. The type of rebirth within the various modes of samsaric existence is entirely determined by the type of karma one has cultivated. Thus the action of one's past generates the type of rebirth which will manifest in the future, and the welfare of the current birth is but a continuation of the cause and effect of one's activities in the past.

The continuation of samsaric existence is very much galvanised by our continuous attachment and aversion to the eight mundane concerns. The first four concerns are attachment to transient pleasure of the six senses, attachment to material gain, attachment to praise, and attachment to image and reputation. The next four concerns are aversion to transient displeasure, aversion to material loss, aversion to criticism and displeasing sounds, and aversion to slander and dispute. Any sentient being who is preoccupied with the eight mundane concerns can expect a life full of ups and downs alternating between unfulfilled expectation and disappointment, constantly at the mercy of uncontrollable emotion which spans the spectrum of anger, fear, grief, elation and worry, without any prospect of gaining liberation in future rebirth.