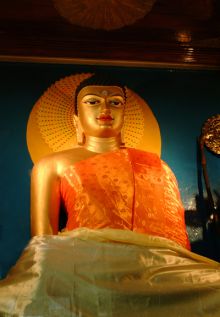 The word Buddha means the Awakened One. Any being who has purified his mind of all defilements and cultivated all of his potential is referred to as the Buddha. There have been many Awakened Ones since the beginlessness of time. The last one in the current world age is Buddha Shakyamuni who was born as Prince Siddhartha Gautama 2500 years ago. Maitreya, the Future Buddha is the next Buddha that is to come.

The Buddha as the Teacher of both Men and Gods has the wisdom of the pure mind and the dexterity of skilful means to expound the various stages of the paths to enlightenment; how to progress from one to the next; what qualities to take with us and develop; and which ones to leave behind. The Buddha transmits the teachings and shows by his example the twelve stages of emanation he himself had undertaken to progress from the state of an ordinary being to the state of full awakening. But the Buddha does not impose on us to take the path, nor does he subject our minds to any form of changes, only we ourselves through sincere conscientious effort can do that. We have to be the ones to take on the responsibility to overcome our own disturbing attitudes, counteract our own impure actions and remove the defilement from our own minds.

The Buddha is also known as Tathagata which means 'He who has attained full realisation of Suchness has come and gone as former Buddhas'. The Tathagata is the Suchness of the ultimate unconditioned nature of all things, it neither comes from anywhere, nor goes to anywhere - the materialisation of that which is expressed in all separate individual things, yet not different from them nor divided by them. The Tathagata cannot be called the one as distinct from the many, for it is not distinct from anything. Nothing connected with it can be disowned or endorsed, for these are merely modes of non-production and non-existence which are neither brought about by duality nor by non-duality, neither defiled nor purified, neither produced nor stopped. For Suchness is not the past, the future or the present, thus through the expression of non-discrimination, in the form of non-observation, it is whatever it wants to be.

The Tathagata is known to possess ten special virtues: never causes blunder; does not speak in heedless or boisterous manner; is always mindful; has no cognition of division; has an ever present concentration of the mind; equanimity is always present; enthusiasm never falters; energy never lessens; mindfulness never diminishes; concentration never abates; wisdom never disappoints; deliverance always liberates; the expressions of body, speech, and mind are preceded by and correspond to cognition; perception and cognition concerning the past, the future, and the present continues unimpeded and without hindrance.