Enthronement of Khenpos and Dorje Lopon at Namdroling Monastery 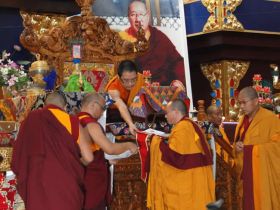 Congratulations are warmly extended to 137 Dharma brothers of Ven. Lama Dondrup Dorje at the Namdroling Monastery in India who have recently become the recipients of the degree of Khenpo and Vajracharya. Their enthronement took place on Saturday 19th March 2011 (the 15th day of the first Tibetan Lunar Month), which happened to be the most auspicious day of Chotrul Duchen which commemorates the completion of 15 days of miracle display by Shakyamuni Buddha 2500 years ago. 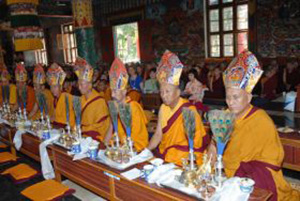 The enthronement ceremony was conducted in the presence of HH Karma Kuchen Rinpoche, the 12th Throne Holder of the Palyul Lineage and many illustrious dignitaries. Also present were members of the management committee of Namdroling Monastery which included HE Gyangkhang Tulku Rinpoche, HE Muksang Tulku Rinpoche, Khenchen Pema Sherab Rinpoche, Khenchen Namdrol Rinpoche andKhenchen Tsewang Gyatso Rinpoche. 120 Lopons who are all graduates from the Ngagyur Nyingma University received the degree of Khenpo (Professor of Buddhist Study) and 17 Lamas who have completed their three years retreat received the degree of Vajracharya (Dorje Lopon).