Commentary on Patrul Rinpoche's Thog Tha Bar Sum Du Ge Wai Tam - The Instruction that is Virtuous in the Beginning, Virtuous in the Middle and Virtuous in the End was given by Venerable Lama Dondrup Dorje at the Pathgate Dharma Centre in Newcastle upon Tyne, England over the weekend of 31st October and 1st November 2009. The two-day event was well attended by many overseas students who travelled to the teaching from as far away as Singapore, Greece, Italy, France, Netherlands and Ireland. 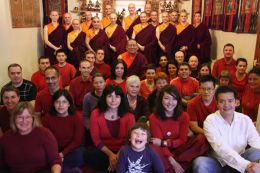 Comprising eighty-two verses, Thog Tha Bar Sum Du Ge Wai Tam explains the entire Buddhist path, from the arising of motivation to the ultimate direct experience of absolute reality, that defines the remedy for the samsaric conditions of the Kaliyuga (Degenerative Age) in accordance to the Mahayana Treatise of the Buddhadharma. Ven. Lama Dondrup Dorje explained that Buddhist practice is about developing a good relationship with the nature of your mind whereby one sees things in their complete nakedness, without ignoring one thing or preferring one thing to another. This state of equanimity is the basis from which one may begin to approach life without turmoil.

Venerable Lama Dondrup Dorje encouraged the students at the teaching to examine their mind so that they may recognise all their fixations on likes and dislikes are merely fabrication created by the conceptual obscuration of their gross mind and has nothing to do with the true state of reality. Only when they arrive at a state wherein they are able to relax within the true nature of the mind, will they come to realise there are no obstacles in the world other than that which they have created in their conceptual perception.

Venerable Lama Dondrup Dorje also recounted numerous inspirational stories from the life of Patrul Rinpoche and went on to explain the motivation for seeking liberation for the benefits of all sentient beings.

Ven. Lama Dondrup Dorje's next teaching in the UK will be the Christmas Retreat, from 28th December 2009 to 1st January 2010. The subject of the Christmas Retreat is Bodhisattvacharyavatara - A Guide to the Bodhisattva's Way of Life. Following the Retreat, Ven Lama Dondrup Dorje will give 2 days of Masterclass Instruction on Classical Qigong and Internal Arts from 2nd to 3rd January. Both events are open only to the formal students of Ven. Lama Dondrup Dorje who have received permission to attend. To read details of this teaching please see Teaching Schedule.