After the wildfires in Greece had died down this summer, Ven. Lama Dondrup Dorje went to Athens at the conclusion of the Pathgate Summer Retreat in Epidavros and remained there for a few extra days. He explained that further rain was needed to help the regeneration of the scorched earth after the wildfires. Since the report on the wildfires appeared on the Pathgate News, it has been observed that daily showers fell upon the city of Athens throughout the month of September – a weather phenomenon that has never occurred before in Athens during the month of September, according to the long-time residents of the metropolis. 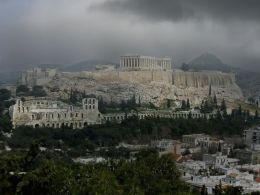 Ven. Lama Dondrup Dorje has long been associated with unusual weather phenomenon over the course of many years. On his recent trip to the Far East, a typhoon, which was meant to arrive in Hong Kong shifted away just as his plane was about to land there. Then on the day after he left for Singapore, a second typhoon actually landed in Hong Kong. Many suggested that this type of recurring phenomena might have something to do with the first Dharma name give to Ven. Lama Dondrup Dorje by the late Holiness Penor Rinpoche. That name is Drakpa Gyaltsen - the name of a well-known 12th century Tibetan Ngakpa lama who was one of the Five Venerable Sakya Masters who established the Sakya tradition. Drakpa Gyaltsen (1145-1216), was known for his strict discipline in Dharma practice and had the following of many ordained students. He was also highly regarded for his ability in harmonising his presence with the elemental forces of nature.