Gem of Wisdom for Daily Reflection: “Openness attracts openness. Sincerity and truthfulness are the foundations of authentic relationship; whereas fear, the sign of obscuration, is its biggest foe.”

Inauguration of the New Office Building of Ngagyur Nyimgma University 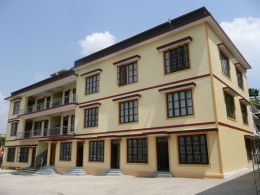 In the autumn of 2007, Ven. Lama Dondrup Dorjereceived permission and blessing from HH Penor Rinpoche to raise the necessary funding for the construction of one new three-storey building for theNgagyur Nyingma Institute of Buddhist Studies atNamdroling Monastery. The project was eventually extended to include the construction of a second three-storey building. The first building with seven classrooms and accommodation for over 100 monks was officially opened in March 2008. Construction of the second building, which is to provide much needed floor space for both the administrative offices and other essential services of the Shedra, commenced soon afterwards and took merely one year to complete. 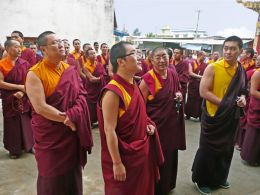 On the morning of the 26th April 2009, at 8.30 am, HE Mugsang Kuchen Rinpoche, Khenchen Pema Sherab along with all the officials of Namdroling Monastery gathered together before the new office building of the Ngagyur Nyingma Institute (NNI) to witness the inauguration and consecration of the new office building conducted by HH Karma Kuchen Rinpoche who performed the ribbon cutting ceremony to declare the official opening of the building. All the dignitaries were invited to the spacious air-conditioned conference hall on the third floor where HH Karma Kuchen Rinpoche, HE Mugsang Kuchen Rinpoche and Khenchen Pema Sherab lit the butter lamps before the altar. 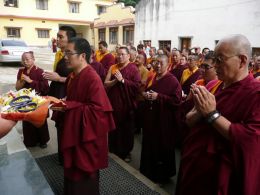 After everyone had taken their seat around the custom-made conference table, the General Secretary of the Ngagyur Nyingma Institute introduced the proceedings of the inauguration before prayers for blessing and removal of obstacles were recited. After tea and sweet rice were offered to the congregation, an audit report on the expenditure of the construction project was presented by the Treasurer of NNI. This was followed by the ceremony of Rabney (the consecration of the three Buddha statues on the altar in the conference hall) by HH Karma Kuchen Rinpoche, HE Mugsang Kuchen Rinpoche and Khenchen Pema Sherab. In accordance to the wishes of the late Holiness Penor Rinpoche, Ngagyur Nyingma Institute was officially renamed as Ngagyur Nyingma University. 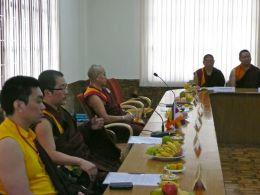 HH Karma Kuchen Rinpoche then bestowed gifts and khatas as a token of gratitude to Lama Dondrup Dorje, the sponsor of the two buildings, as well as to the building contractors who were involved in the construction. Both Khenchen Pema Sherab and HH Karma Kuchen Rinpoche gave speeches of thanks and advice to the congregation. The first one to speak wasKhenchen Pema Sherab who expressed his gratitude to Lama Dondrup Dorje for providing financial support to the construction of the two new buildings for Ngagyur Nyingma University. He also thanked everyone who had worked hard to make this project successful. Khenchen reminded everyone present that His Holiness Penor Rinpoche’s main goal in establishing Namdroling Monastery is to preserve and propagate the two-fold teachings ofLord Buddha, namely the Scriptural Teachings of Dharma and the Teachings of Realisation. These two-fold teachings involve the three activities of study based on the conduct of pure morality which include the activities of giving discourse and listening, the practice of debate, and the practice of composition. 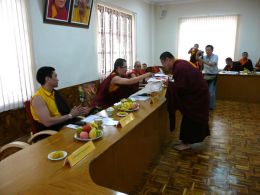 Khenchen explained the preservation of the Teachings of Realisation is to engage in meditation practice and to put into action what we have learnt from theBuddhist text because these two-fold teachings are very much inter-related. Without the support of scriptural knowledge, one cannot engage in Dharma practice and hence there is no way of achieving realisation. On the other hand, without realisation, scriptural knowledge alone cannot liberate us. Therefore, both must go hand in hand. Khenchen felt that we should keep this in mind as we strive to preserve these two-fold teachings of Lord Buddha. On the need of buildings for classrooms, offices, and accommodation, he expressed the view that we have to make sure that these facilities serve as causes and conditions to preserve and propagate the two-fold teachings of Lord Buddha. He reiterated that we should not feel complacent about the new buildings and we must continue to work hard to accomplish our main goal. 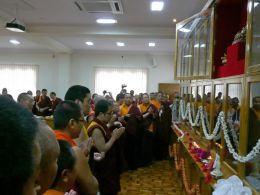 HH Karma Kuchen Rinpoche began his speech by saying Lama Dondrup Dorje deserved appreciation and praise for his support in establishing two new buildings for the Ngagyur Nyingma University. Having personally thanked him and also those involved in the construction, HH went on to remind those who worked in these new buildings and offices should avoid getting involved in any political or other worldly aspirations, and that they should make sure that whatever they do must be with pure intentions and in accordance to the teaching of Dharma. He said if they do so in this way, then they will fulfil the wishes of the sponsor and whatever the amount the sponsor has contributed will not go to waste. 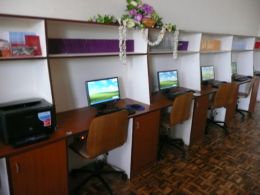 HH Karma Kuchen Rinpoche further explained that studying scriptures and achieving realisation are the main purpose of our spiritual activities. The studies at the Shedra which include listening, giving discourse, debate and composition are very important but if these are not put into actual practice, then all these studies would be meaningless. As being the holders of Nyingma tradition, we must meditate and practise after listening and contemplation. The speciality of the Nyingma tradition lies in practice and not in study alone. If we look back to the past, we have so many realised masters who have devoted their whole life in practice. We should follow their example. 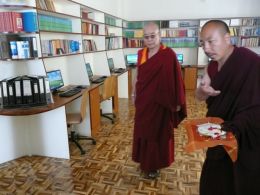 After a final speech of thanks from Khenpo Khyentse Norbu, the Principal of NNU, the dignitaries were given a guided tour of the building, which is now the new home of the NNU's administrative offices. In addition, it also houses the computer department,editorial committee office, reception office, donation office, photo-copying room, book shop, general store, STD telephone centre and a modern canteen. Every room in the building has been furnished to a standard in accordance to its need and function. In addition to a batch of computers previously sponsored by Ven. Lama Dondrup Dorje, twenty-five brand-new flat screen computers have been procured for the computer department and the Rinchen Terzod Editorial Committee, through which Dharma texts are computerised into digital storage and publications of Dharma books and magazines are made.

The morning activities were bought to a close at noon with a most splendid lunch offered to all the dignitaries at the new canteen on the ground floor.

If you wish to be part of the Pathgate Partnership Programme, which sponsored the two new buildings of NNU and many other worthy projects worldwide, please click donation.