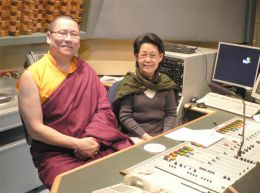 Lama Dondrup Dorje was a guest of Radio Australia of the Australian Broadcasting Corporation during his recent teaching tour in Australia. He was invited by Muntha Crowe, a broadcaster of the Khmer Language Service in Melbourne to speak on her radio programme, which caters to the Khmer language speaking audience in Australia and Cambodia. Lama Dondrup Dorje gave some timely advice on a range of challenging conditions from a Buddhist perspective, which was welcomed by the seasoned broadcaster who then expressed her wishes to edit the interview into a series of segments to be aired over several shows. 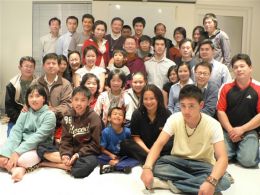 In Melbourne Lama Dondrup Dorje gave a series of public teachings, and visited the Chan Academy in Upwey where he was invited by the resident Abbot to consider giving teaching at their centre. At his next stop in Sydney, Lama Dondrup Dorje was a guest of the Asian community of Cabramatta, which has a population largely composed of immigrants from Cambodia, Vietnam, Thailand, Laos, Hong Kong, and Taiwan. Due to the enthusiastic responses he received, Lama Dondrup Dorje will return to Melbourne and Sydney to give further teaching onBuddhadharma and Classical Buddhist Qigong. For his autumn schedule, Lama Dondrup Dorje will also visit Hong Kong, Singapore, Dublin, Athens, Portugal and India. To know more, please visit the Teaching Schedule.