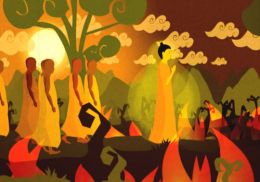 New to the Dharma Theatre is an animated feature based on the Jataka Tales of With Wings That Fly Not, which tells the birth stories of Buddha Shakyamuni 's past life as a quail. This is one of the 547 stories recalled by Buddha Shakyamuni of his previous births in the various reincarnation of being animal, bird and human.  The enlightened qualities of a Bodhisattva - that of wisdom and skilful means in implementing acts of compassion for the benefit of all sentient beings - which lead to the attainment of Buddhahood, prevail throughout the pages of the Jataka Tales.

With Wings That Fly Not tells the story of the Buddha-to-be as a young quail performing the miracle of stopping a raging forest fire by calling on the Buddhas of the past through an 'Act of Truth'. This is the first of a series of animation projects to be produced by the Editorial Committee of the Pathgate Institute of Buddhist Studies. The objective of these animated features is to bring to life these timeless tales, which convey the essence of Buddha Dharma that will promote the greatest benefit for all sentient beings. We hope you will have as much joy watching it as we have in producing it. To read the story of With Wings That Fly Not, click Dharma Tales. To watch the animated feature, click Dharma Theatre.