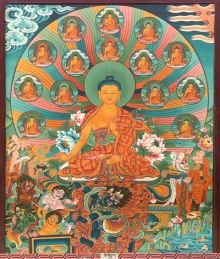 The accumulation of the Paramitas - the Perfections of Virtues in the practising of Generosity, Ethical Discipline, Forbearance, Enthusiastic Effort, Meditative Concentration, and Pristine Wisdom - are the fundamentals of the Bodhisattva Path. They are the key foundation which lends support to the subsistence of one's temporary and ultimate welfare as well as that of all beings. In order to benefit from the blessing of temporary welfare, whereby one can enjoy a succession of fortunate rebirths which offer conditions ideally suited for the advancement of spiritual growth, it is vital that one perseveres in the practising of the Paramitas, so that greater accumulation of Transcendent Merits and Primordial Insight are continuously generated. Without great stores of accumulated Transcendent Merits and Primordial Insight, it is not feasible to attain any degree of Awakening, because these two qualities are the pre-requisites for Enlightenment.

These two pre-requisites are also the factors which make it feasible for an Act of Faith - a miraculous feat which transforms the dynamics of time, space and matter - to manifest. The Biblical story of Jesus turning water into wine, and the Buddhist's tales of the jungle fire extinguishing itself automatically before Buddha Shakyamuni, are two classic examples of an Act of Faith. This Act of Faith, often referred to as an Act of Truth, can only be amplified into being by one who has already attained great accomplishment on the Bodhisattva Path; one whose vast stores of accumulated Transcendent Merits and Primordial Insight into the Single Truth in Nature, enable the most subtle level of the Bodhisattva Mind to generate an Act of Faith through a process of meditative absorption which inter-links one's Faith and the Single Truth to replicate in the present the Efficacy of Perfections of the past as attained by the Enlightened Beings in times gone by.

Whoever has attained great stores of virtues, spiritual accomplishment and extraordinary ability in one's past lives can count upon the restoring of such endowment in the present life when the necessary catalysts of wholesome factors are brought into the picture. Likewise, the non-virtuous transgressions one has sown in past lives are but the potentiality of sufferings one will experience in the present time and in the future, once the seeds are ripened into maturity at the beckoning of unwholesome catalysts. The interactive dynamics of one's endeavour in the present time serves as the catalyst which activates the ripening of potentiality of what one may deem as beneficial or unsatisfactory in one's present and future existence. Thus, the probability of one's success in cultivating spiritual accomplishment in the present existence, or developing extraordinary ability whereby Acts of Faith can be generated, rests entirely upon the degree of steadfast commitment to the practising of Paramitas - the Perfections of Virtues.